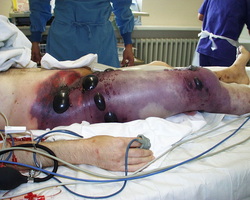 Along with trench foot soldiers were at risk of contracting gas gangrene.  Pailler and Labeeu
(1986) describe gas gangrene as an infection “which is mostly the result of a contamination
of the muscles from traumatic or post-operative origin” (para.1)The soil in France and Flanders
was highly cultivated and contained a large amount of horse manure, which contains bacillus
bacteria (Ellis, 1976, pp.112-113).  Because the trenches were filled with mud, soldiers’ clothing
because saturated with the bacteria (Ellis, 1976, p. 113).  When these men were wounded, it
would be likely that pieces of their bacteria-saturated uniforms would lodge into the wound,
causing an infection (Ellis, 1976, p.113).  Ellis (1976) quoted a doctor whose name is not
mentioned, describes the symptoms of the infections as follows: “After forty-eight hours the
edges of the wound begin to swell up and gape… The cut surface takes on a curious half-jellified,
half mummified look; then in most extraordinary fashion, turning as it does so, first an ashy white
and then a greenish colour.  This is because the tissues are being literally blown out with gas, and
on pressing the fingers down on this balloon-like swelling, a distinct crackling or tiny bubbling sensation can be felt” (p. 113). Near the beginning of
the war, doctors felt that the wounds were best left alone and would heal without treatment.  This assumption was terribly wrong.  In fact, the conditions
became substantially worse because the infection continually spread and would also infect major organs.  Because of this initial lack of treatment, many died from the infection. Pailler and Labeeu (1986) claim that “some 100,000 German soldiers lost  their lives” (para. 1), and “the U.S had 2,718 total cases and of those 1,267 of the men died” (U.S. Army Medical Department, Office of Medical History, p. 412).  With more acquired knowledge about the infections doctors amputated the infected body parts.  Stout (1954), the author of “War Surgery and Medicine” writes that amputation was done to prevent spreading to other body
parts (p. 129).  This operation might seem drastic to some; however, the infection tended to spread rapidly, so amputation was common to prevent further disease and death (Stout p. 129).  Most soldiers took the news of losing a limb fairly well when they discovered they had contracted gas gangrene.  They realized that their chance of survival decreased dramatically if they did not remove the infected limb.  In Eye Deep in Hell, Ellis (1976) quotes Surgeon Harold Dearden speaking of a soldier saying, “’The lad was very good when I told him I thought he’d better have it off’” (p. 113).  Gangrene-causing bacteria were not the only things filling the trenches.  Because troops had no proper facilities to wash regularly and the latrines were overflowing, the trenches were filthy.  Trenches flooded with stagnant, urine- and corpse-filled water made a utopia for other pests such as rats, lice and flies.