Conditions in the Trenches 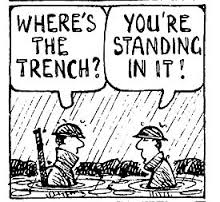 Trench warfare was something new and unfamiliar to the
world.  In John Ellis’s (1976) Eye Deep in Hell, Paul Nash describes
this new way of war as follows: “No pen or drawing can convey this country- the
normal setting of the battles taking place day and night, month after month.
Evil and the incarnate fiend alone can be master of this war, and no glimmer of
God’s hand is seen anywhere.
Sunset and sunrise are blasphemous, they are mockeries to man, only the
black rain out of the bruised and swollen clouds all through the bitter black of
night is fit atmosphere in such a land.
The rain drives on, the stinking mud becomes evilly yellow, the
shell-holes fill up with green-white water…the black dying trees ooze and sweat
and the shells never cease.  They
alone plunge overhead, tearing away the rotting tree stumps… annihilating,
maiming, maddening, they plunge into the grave which is this land;
one huge grave, and cast upon it the poor dead. It is unspeakable,
godless, hopeless” (p. 9).
Trenches were terrible facilities for troops, we will now explore the
environmental conditions of the trenches and health threats that soldiers
endured on the Western Front, including the stench caused by dead bodies, mud,
trench foot, gas gangrene, rats, lice and
flies.


James Paterson (2012) vividly describes the strong odor of the
trenches as “the first thing a new recruit would notice on the way to the
Frontline”.  He stated that the
trenches smelled of “rotting bodies in shallow graves, men who hadn't washed in
weeks because there were no facilities, overflowing cess pits, creosol or
chloride of lime, used to stave off the constant threat of disease and
infection. Cordite, the lingering odour of poison gas, rotting sandbags,
stagnant mud, cigarette smoke, and cooking food” (Paterson, 2012).  Michael
Duffy (2009) states that “200,000 soldiers died on the Somme battlefields, and
the majority of those who died were buried in shallow graves.
Men died all over the battlefields, including areas such as “no man’s
land,” shell holes, and the trenches.
Due to the number and location of these deaths, as well as the continuous
onslaught from the opposition, fellow soldiers could not give their fallen
comrades a proper burial.  Many
bodies were thrown into shell holes and covered with little dirt.
Other men, thought to be dead, were buried alive in dugouts.
Still more men simply remained where they had fallen.  Ellis
(1976) quotes Siegfriend Sassoon describing death in the trenches as follows:
“’Clink of shovels deepening the shallow trench.  The place was rotten with dead; green
clumsy legs High-booted, sprawled and groveled along the saps and trunks, face
downward, in the sucking mud’” (p. 43).